Schedule An Appointment
Release of Information Form
Contact Us

Be Our Friend
Keep up to Date

Anxiety is often a stronger response then needed to a normally stressful situation.

How one manages stress and anxiety can make or break a meeting or sale or date. Dr. Diego can help you cultivate the skills need to manage crucial situations. Most performance refinements can be addressed in a few sessions that don’t involve an in depth exploration of your childhood.

Sessions focus on the situation and experiences you wish to change and address any fear, apprehension, or anxiety you may experience. Proper attention to experiences and skill building is at the heart of crafting your own solutions today and in days to come.

It’s more than coaching, its working together to define what is biologically and neurology going on and following through on a plan of action.

Fear can be a powerful motivator. Unfortunately for the most part it motivates us to avoid or withdraw. Most fears can be addressed with CBT and ART. The more specific the fear, the more specific we can focus in session in fewer sessions, like a fear of flying. 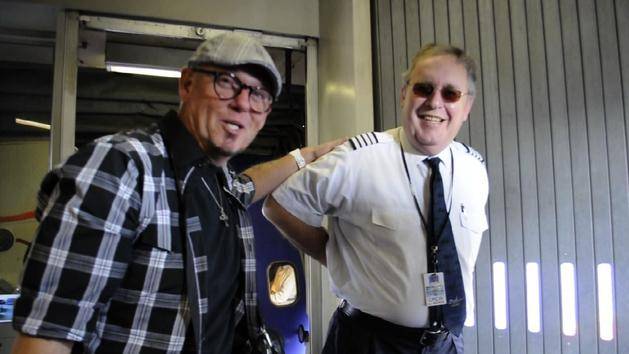 Cledus T. Judd also got past his fear of flying after the therapy normally used to treat PTSD.

By HOWARD ALTMAN | The Tampa Tribune

Back in the late 1990s, country music comedian and radio personality Cledus T. Judd was returning to Orlando from a tour with Kenny Chesney when his flight hit such extreme turbulence that he was thrown out of his seat and he broke his nose, leaving him a bloody mess.

Judd, a morning personality on Tampa’s WQYK (99.5 FM), thought the plane was going to crash. He was so traumatized he has flown only once in all the years since.

“It got so bad that my best friend, a Delta pilot, could make it to Munich before I could make it from my home in Clearwater to see my daughter in Cartersville, Georgia,” said Judd, whose real name is Barry Poole.

But a chance meeting with a stranger on a golf course a few weeks ago seems to have led to a cure for Judd’s fear of flying. And that may be an unlikely boost for a promising new therapy for post-traumatic stress disorder being studied by the University of South Florida.

“I was playing golf at Old Memorial in Tampa with some buddies and had the chance to play with Chris Sullivan, one of the founders of Outback Steaks,” Judd said. “I was talking about flying and my incident and that I had not flown in years and was ready to do it.”

Sullivan said he listened to Judd, saw the look on his face, and had a suggestion.

The restaurateur is working with the USF College of Nursing’s military liaison, Carrie Elk, on finding additional funding for a treatment she and principal investigator Kevin Kip are studying called Accelerated Resolution Therapy.

The therapy, which uses eye movements to help patients replace traumatic memories with more pleasant ones, has already shown positive results in a study the researchers have conducted on civilians.

“I told Cledus I know this woman who has this program, and it has worked,” Sullivan said.

Judd, 47, said he was deeply moved by the suggestion.

“A guy reached out to me who I never met,” Judd said. “He saw the anxiety in my eyes and the hurt of years of missing out on things. There is no quality of life when you drive that many miles alone.”

So Judd contacted Elk, who treated him in her private practice about a week ago.

At first, the comedian, whose country music parodies make him the Weird Al Yankovic of the Grand Ole Opry set, said he felt “a little guilty” about seeking out a treatment being studied for treatment on combat traumas.

“She deals primarily with people who have experienced a million times worse things than me,” he said. “Guys who’ve killed people. Guys and girls who have been shot at. Injured. Lost limbs. I felt guilty.”

But he said he wanted to fly so bad that he overcame his guilt.

Elk said it doesn’t matter whether someone has experienced trauma from battle, a bad flight or an abusive spouse.

Accelerated Resolution Therapy, she said, “is the most efficient therapy I know of for someone who has experienced trauma. It has a very short course of treatment and it doesn’t just provide coping skills, it resolves the traumatic response so they don’t have it anymore.”

The results of the USF study on civilians, which was funded by the Substance Abuse and Mental Health Services Administration and wrapped up last month, “were pretty amazing,” Elk said. The civilian study found that those undergoing the therapy were no longer experiencing PTSD symptoms, had increased levels of sleep quality and quantity and decreased levels of depression.

Those results, she said, will be presented to an upcoming American Psychological Association conference and are under review for publication in the Journal of Traumatic Stress.

Elk and Kip are conducting another study, funded by the Department of Defense, aimed at veterans. So far, the researchers have treated 40 of the 80 veterans they have funding for and are looking to enroll the rest by August.

“I went through the process, paid attention and tried to do what I was told,” Judd said. “I slowly felt the anxiety leave as I replaced the traumatic experience with a more pleasant one.”

Judd – who spent years driving by Tampa International Airport and had even booked himself onto flights, only to opt to drive – finally got back on a plane Wednesday.

The pilot announced the flight would be bumpy.

So well that Thursday, he flew back to Tampa.

Judd said he was so elated by the experience that he videotaped his journey with an eye toward documenting how fear can be overcome. He got to meet the pilot afterward and gushed about the whole thing on his radio show.

“I travel for a living and was unable to fly,” he said. “Two days ago I mounted a 737, flew two hours home and then back again. The therapy absolutely changed my life.”

Sullivan said he hopes Judd’s experience will help increase awareness of the treatment and funding for trials so the USF researchers can eventually add to their current veteran study and someday treat active-duty troops.

Elk said that while she is heartened to hear her patient was able to fly again, more study is needed.

“A lot of people see this as promising,” she said, “but we need data, because proving this works has to be evidence-based and we have to have the science behind it.”

Schedule An Appointment
Release of Information Form
Contact Us